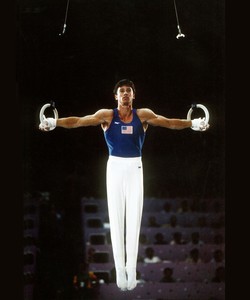 Mitch Gaylord first thrilled the world in 1984 when he led the United States Olympic Gymnastics Team to its Gold Medal victory. Mitch holds the distinction of being the first gymnast in American history to score a “Perfect 10”. Mitch went on to capture a Silver Medal for Vaulting and two Bronze Medals for Rings and Parallel Bars. As the number one ranked gymnast in 1983 and 1984, Mitch invented two skills now named internationally after him. To this day, the Gaylord Flip and the Gaylord Two are considered among the most difficult and spectacular feats in gymnastics.

After the Olympics, Mitch was appointed to the President’s Council for Physical Fitness by President Reagan and was asked to return for a second term under President George Bush, Senior. During this time, he fulfilled numerous speaking engagements, endorsements and appearances across the country. In 1986, Mitch made his acting debut in Columbia Pictures’ “American Anthem” and went on to appear in several commercial advertisements including Diet Coke, Nike, Vidal Sassoon, Soloflex, Levi’s, and Texaco to name a few.

Mitch Gaylord has been motivating and inspiring audiences worldwide for over 32 years, speaking to Fortune 500 Companies, Associations, and Students across the country. His personal mission is to inspire others to greatness through his presentations and products. In 1995, he was inducted into UCLA’s Hall of Fame, and in 2006, he was inducted into the US Olympic Hall of Fame. Mitch has served as a journalist/broadcaster for FOX Sports during the Atlanta Olympics and anchored the 2009 Maccabiah Games in Israel with JLTV. He has also served as a Celebrity Judge on NBC’s “Celebrity Circus”.

As a motivational speaker and fitness expert, Mitch was asked to endorse several fitness products for the DRTV market including Suzanne Somers’ “Torso Track” and “Body Row”, as well as, “OrbiTrek Platinum” for Thane International.

Mitch has now added another chapter in his wide-ranging career. He is now teaching classes and inspiring a new generation of people at The Lagree Studio founded by his wife, Valentina Gaylord.  Mitch resides in Austin, Texas with his wife, Valentina and their two children Valletta & Luc.